The introduction of the Elementary Education Act 1870, commonly known as Forster’s Education Act, created the concept of compulsory education for children under thirteen, although it only required the provision for education of children up to 10 years of age.

Following the 1868 General Election, William Gladstone appointed William Edward Forster (right) as Vice-President of the Committee of Council on Education. Forster therefore had responsibility for carrying through the House of Commons the 1870 Education Act.

The Elementary Education Act 1880 insisted on compulsory attendance from 5–10 years. Children under the age of 13 who were employed were required to have a certificate to show they had reached the educational standard. An Act brought into force 13 years later went under the name of the Elementary Education (School Attendance) Act 1893, which raised the minimum leaving age to 11. This act was later amended in 1899 to raise the school leaving age up to 12 years of age.

The Education Act 1902, also known as the Balfour Act, abolished School Boards and replaced with Local Education Authorities, which are still in use, by  and large, today [2020].

Arthur Balfour (picture – left) had been elected MP for Manchester in 1885 and replaced his uncle, the Marquess of Salisbury,  as Prime Minister in 1902.

It was not until after The Great War that the Education Act 1918, commonly also known as the Fisher Act, introduced compulsory education from 5 – 14 years.

It is without doubt that many of the War dead from these villages would have attended their local School as a child. In Buxton town itself there were still the provisions provided for both boys and girls by the former ‘Board Schools‘, and in addition the town had a number of Independent ‘private’ Schools, for both boys and girls – many of the former being linked to acceptance into Public Schools and on into the Armed Forces.

The principle boys’ Schools at the time may be summarised as under, although it is unclear whether the LEA boys’ School was known as ‘Kents Bank‘ then, or this name was attributed later. There was another Junior School at Hardwick Square, Buxton, which had opened in 1875. The other three Schools listed were all Independent and Private.

For the purposes of this analysis – and discounting the girls’ only Schools – Buxton Schools have been divided into four Centres: 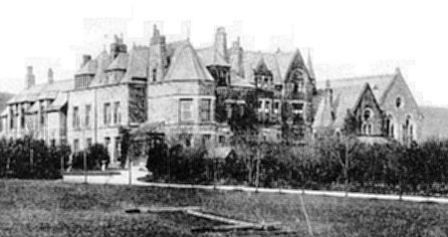 The school was founded in 1675 by an amalgamation of various legacies of an earlier date together with subscriptions taken then. Its motto was Sic Luceat Lux Vestra – “Let your light shine forth.”

After re-organisation moved as the Buxton Endowed School to new premises, opened on     The postcard above dates from c. 1910 27th September 1881, built on land off Green Lane.

The new building was designed by William Pollard of Manchester and by 1900 there were nearly 100 boys of whom 60 were boarders. By 1910 there were still over 70 boys but the number of boarders had dropped to 26 and the position of the school was precarious. After the War, in 1923, the School joined the state sector as a Grammar School.

Both Harry Sackville Lawson and Robert Edward Knight were subsequently to lose their lives during the War and are commemorated on this site. Virtually all of the boys attending the School listed on that Census were probably too young to enlist, but reference to earlier School records show that many of Buxton’s War dead attended the School in earlier years. In addition, of course, as boarders came from all over the Country, others may well be commemorated on their home Memorials.

One of the most notable ‘Old Boys’ was Captain William Howard Lister, D.S.O., M.C. [2 Bars], Royal Army Medical Corps, killed in action 9th August 1918, who left in The College in 1905. He is without doubt one of the bravest men commemorated on this site. 2/Lt. James Ashwell Howe and Pt Bernard Harrison were other ‘old boys’ of the School, as was Paymaster-Lt. Louis Needham, D.S.C.

As far as is known the School erected no individual Memorial to its War Dead from World War 1. However, at the end of the Second World War a Plaque was erected in the School Hall, by “Old Buxtonians“, “In memory of their comrades who gave their lives in War, 1939-45“.

This Plaque listed the names of 33 Old Boys who made the Supreme Sacrifice and was mounted in the School Hall. However, when the School was re-organised in 1990 by merging with the local girls’ School to become Buxton Community School, internal renovations meant the Plaque was removed and placed into storage.

After research by Scott Allsop – then a pupil at the School – now administrator of this website – the Plaque was found, and reinstated in its rightful place. The Buxton Advertiser carried the story, which can be read by clicking the photo below right. 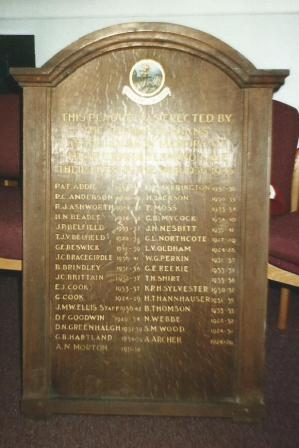 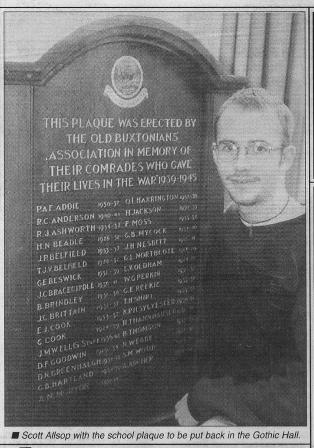 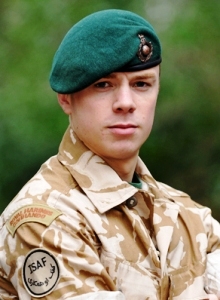 In more recent times Scott Gregory Taylor joined the Marines in September 2007, aged 18, after completing his GCSEs and A-levels at Buxton Community School. Scott died in an explosion on Sunday 30th May 2010 while on foot patrol near Sangin with Alpha Company, 40 Commando.

He was brought home and buried with full Military Honours. Thousands of local residents lined the route of his cortege and Scott now lies in Buxton Cemetery, with the War Dead from earlier conflicts.

As stated above – and as with the local Village Schools, such as Fairfield, Harpur Hill and Burbage – it is most probable that many of the Buxton men who subsequently enlisted attended, at some time, the local ‘Board School’ located on Kent’s Bank Road, Buxton, prior to its re-organisation in 1902. Hardwick Square Junior School was opened in 1875 and was for boys and girls. (Now “Buxton Infant School” and exists on the same site today [2019])

The School, which later became ‘Kent’s Bank Boys’ School’ and now houses Buxton Library and certain Council Offices, has no Memorial for its World War 1 casualties. It does, however, have a Memorial for World War 2 dead, as an engraved stone insert into outside end wall of former main school hall. 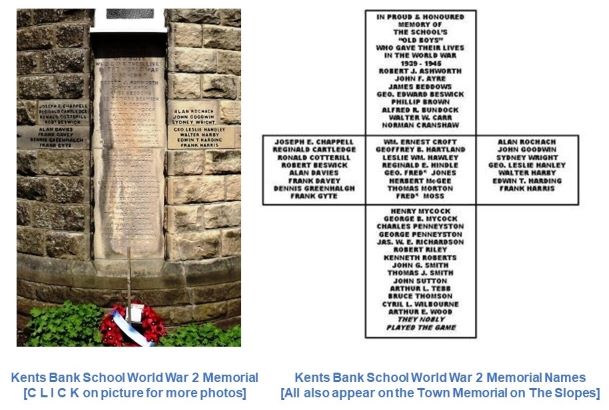 Pt. 40926 George MITCHELL, 1st Battalion, Leicester Regiment, was killed in action on the 11th September 1917. George was employed as a ‘Library Assistant – Public‘, and although the Library was not in its present location at that time, a Plaque in his honour can now be found inside the current building.

[See: Pt. George MITCHELL’s page on this site for more information about his life and service.]

The School was founded in 1877, initially as a Preparatory School, moving to full boarding for boys, with many pupils from overseas. From 1962 until 1975 Normanton School was the home of Buxton Sea Cadets, with members coming from the school, as well as the town and surrounding villages. ” At this time, the Unit could put on a guard of very tall lads and so was popular, often travelling to Sheffield, Chesterfield, Manchester and Stockport. At the front of the school were a flagpole and a small boat, referred to as the Whaler“.

The only man on the Buxton Memorial known to have attended the School before going to Oundle School, was Private Guy Stevenson HEWITT, of the Artists’ Rifles, who “At the age of 17 he was nominated for Sandhurst, but did not take his commission on entering the Army“. Guy was killed in action on the 8th March 1918.

With the Schools’ military links and tradition of preparing boys for Public Schools (often on to Sandhurst), it is most unlikely that he was the only former pupil not to have gone into Military Service, both in the First and Second World Wars. [Similar to Holmleigh School – see below.]

In latter times the School concentrated on taking pupils (co-educational from 1987) from Service families, and many followed their fathers into the Army, Navy and Air Force. Old Boys of the School served with distinction in the First and Second Gulf Wars and in the Balkans conflict.

[N.B. The Author of this site, Graham E. Conway, was Headmaster of Normanton School from 1986 to 1997, when the School closed.

After the closure, Graham moved to Derby University to lecture in Earth Sciences [before retiring to build websites!]. 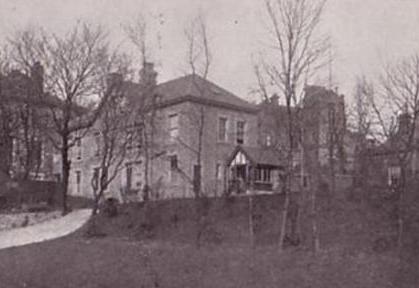 Situated on Devonshire Road, Buxton, Holmleigh was described in its Prospectus as a: “Preparatory School for Public Schools and for the Royal Navy“.

The School Prospectus also claimed: “Nowhere is the air purer or more bracing : water supply good and soft. Health is the first consideration. The standard of work ensures entry into Public Schools. Games are systematically taught.“ 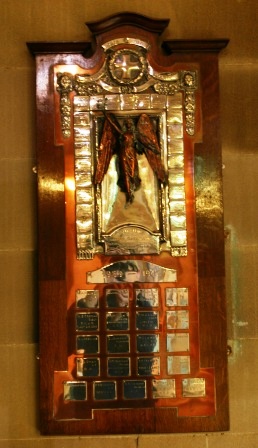 At the end of the Great War a Memorial to the former pupils of School who were among the fallen was placed in St Johns Church, Buxton.

Situated on the west wall of the nave, to the right of the Chapel of St Michael and St George (also known as the Lady Chapel), the Memorial consists of an oak wall plaque containing silver plates, each engraved with the name and Regiment of each of the School’s War dead.

The upper section carries 25 such plates around a ‘Winged Angel‘ and the Latin inscription – ‘Per Rege at Patria’ (‘For King and Country’). The lower portion contains a further 21 plates for those killed 1939 – 45.

The School closed and was demolished in 1961.

[CLICK the photo above for a transcript of the names on the Memorial.]

Five of the ‘old boys‘ named are also included on the Buxton Town Memorial. All moved from Holmleigh to Public Schools, from where they entered Military service as Officers.

At the end of World War 2 the Memorial was added to with the names of those who fell in that conflict. [See: photo – below right] 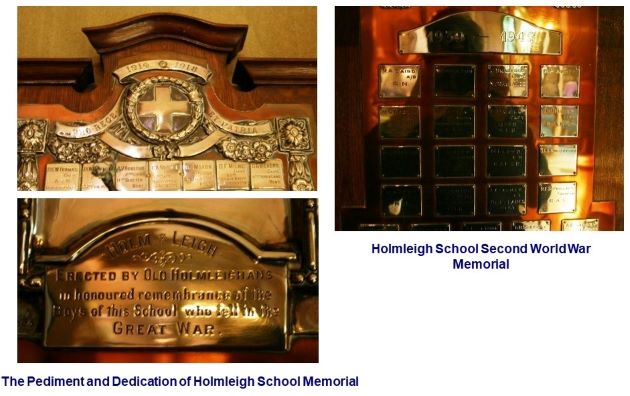 · I am grateful to Richard [Derbyshire War Memorials] for the photos of Holmleigh Memorial from St John’s Church, Buxton.